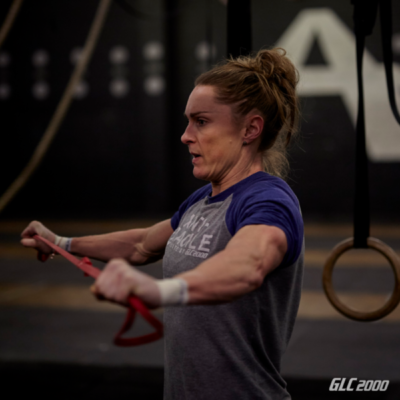 At the highest level of sport, injuries do happen. Crossfit athletes are constantly pushing the envelope of fitness, moving heavier weights, faster, and for more reps. This ever increasing volume constantly puts strain on joints and connective tissues, which are much slower to adapt and repair than muscle.
Most of the time injuries can be overcome by resting appropriately, eating well and with the use of smart supplementation. However, surgery is required in some severe cases, and we were lucky enough to discuss strategies for fast post surgery recovery with GLC2000 ambassador since 2012 and 2013 Crossfit Games Champion Samantha Briggs. In this Q&A interview we touch on:

So let’s get into it:
[GLC2000] Hi Sam, so it’s pretty common knowledge that last year after the Crossfit Games you had shoulder surgery, what was the specific procedure and when was the exact date?
[SB] Yep that’s right my shoulder surgery was at the end of August 2016. I had a labrum and bicep tendon repair and an AC Joint excision.

What symptoms indicated that something was seriously wrong with your shoulder?
There was some nerve pain down the left arm, loss of use of left arm, peck and delt switching off.

That was obviously affecting your training & performance.
It was difficult to perform certain movements and it was regularly affecting my sleep.

How long would you say you had been carrying your injury? Can you remember when it happened?
I was having issues with my left shoulder for about 6 months and it was gradually getting worse. Then 2 weeks before the Games I lost use of my left arm.

Not great timing. So how did you decide to go under the knife?
After the Crossfit Games, even with a drastic reduction in volume of training my shoulder wasn’t getting any better so I had an MRI. The consultant basically said there was nothing left in the front of my shoulder to help stabilise it. So if I wished to continue CrossFitting I had no choice other than to get it fixed.

Is this a common injury/procedure with Crossfit athletes?
Almost all the movements we do in CrossFit involve the shoulders so a lot of CrossFitters at all levels struggle from shoulder injuries.

What was your recovery time?
My surgeon and therapist work on a very aggressive recovery protocol … on their schedule I was bang on time back doing everything at 15 weeks post surgery … which for most shoulder surgeries of this type is well ahead of schedule.

What do you think is the most overlooked aspect of recovery from surgery?
Overall health… people underestimate the effects of eating right. The body needs to be getting the right fuel to heal from surgery.

And of course GLC2000?
Haha – yes of course GLC2000, but that’s a given. After my surgery I increased the amount of fish oil and GLC2000 I was taking and I definitely felt the benefit.
I’ve run out of GLC2000 a few times and after regular training I felt stiff and sore. So there is no chance I would be without it after an injury or as now preparing for the Games.

So let’s say you picked up this injury and required surgery 12 weeks before a major competition, like the Crossfit Games. What would your plan for your recovery look like? What would you be doing even before you went into surgery?
I think realistically 12 weeks out you’d have to consider not competing … I was 2 weeks out so it was manage the injury as best as possible … for 12 weeks you wouldn’t be able to train at the level needed to compete.
Before surgery I hear of people going crazy with their training because, ‘hey they’re getting a new shoulder’!!! I went in the complete opposite direction and did everything I could to not make it worse as the healthier you are going into the surgery hopefully the quicker the recovery!!!

What would you do differently if the scenario changed to only having 8 weeks post surgery until the competition?
Again you couldn’t really do this … I qualified for Dubai Fitness Championships during 7-9 weeks post op … I was fairly lucky with the qualifying workouts as at that time there were still some movements that I couldn’t do yet! Especially in a large volume or in the intensity needed to compete.
My rehab was very aggressive and recovery time was fast. But I still had to be careful and monitor my pain levels, so I could make progress safely and not ruin the work the surgeon had done.

What advice have you shared with other athletes? Have they been able to replicate your results?
My biggest advice to anyone with any form of injury or recovering from surgery would be to be diligent with your rehab. I was doing over three hours of shoulder rehab exercises a day. My diet was cleaner than it ever was and I supplemented my diet to promote the best recovery I could. Everyones recovery will look different and the protocol I used wouldn’t be right for everyone. But if they work with a physical therapist who understands what they’re trying to achieve then I’m sure they can be as successful.

Who has been instrumental with your post shoulder surgery recovery?
I worked closely with Room One Physio in Belfast for my post surgery protocol. I have also had the Physio Lounge taking care of me whilst I was back in Manchester. James Jowsey then programmed for me accordingly and added in the ninja warm up routines he’s known for.

What is your best shoulder warmup/mobilisation exercises?
Because I also had the bicep tendon repaired… The bicep opener by StrongFit was a great one I used regularly:

With the Crossfit Games just over a month away how’s your preparation going?
I’m feeling great just excited to get started. Now my shoulder is better than the non surgery side so rehab is fully done.

What is the most significant difference in your training? What is the biggest constant?
My programming is now completely done by one person, where previously I’ve had separate coaches for different aspects of my training. This has been quite hard, as previously I have been able to add things in myself. So I’m just trying to follow the program. For the most I’ve been a good athlete and done as I’m told ha!

Congratulations on qualifying for the Crossfit Games twice this year, quite an achievement. What were your reasons for going Rxd rather than 35-39 category?
The biggest competition is in the Rx’d so as long as I can still qualify I’d like to pretend I’m still one of the kids.

We wouldn’t expect anything else for you Sam. Thanks for your time, hope that your preparation goes well over the coming weeks. Look forward to watching you in action in Madison.