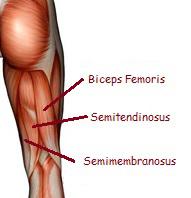 What causes recurrent sporting injuries? Why is it important to think outside the box- look away from the area of injury?
Sometimes even when we feel we have done the optimal rehab for an injury such as a hamstring strain or ankle sprain, these injuries keep on coming back to haunt us. It can sometimes be very important to look at different areas of the kinetic chain to see how your own entire movement patterns are affecting the way a single muscle group works. In other words- it may not be your hamstrings’ fault that they keep failing under load!

The functional role of the hamstring in gait:

Although we know that the hamstrings flex the knee and extend the hip, the actual functional role of this muscle group is more of an eccentric one. When the leg swings forwards in gait, the hamstrings work to decelerate the forward momentum of the tibia as it comes through from a bent-knee position to a straight-knee position, to then make contact with the ground for the next step. This role is more exaggerated with faster movements (i.e. running), hence a hamstring injury or strain often occurs when athletes are running at a high speed. 1

This can be exaggerated further still when changing direction quickly, and combined with a big hip flexion movement (hitting a ruck/ reaching down to receive a dodgy pass/ getting low for a tackle) this can be a death sentence for vulnerable hamstrings.
This gives you two options:
1) stop doing the things that put your vulnerable hamstrings under too much load;
2) find out what’s making them vulnerable and fix it.
Now, since you are a sportsperson I know that you won’t be able to comprehend option 1, so let’s move straight on to option 2. 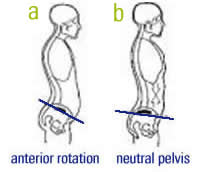 If you spend a lot of time sitting at a desk or in the car, and then do repetitive hip flexion movements in the gym such as squats or deadlifts, you are reinforcing your hip flexors to be short, tight, and overactive. Tight hip flexors can pull the pelvis into an anterior tilt. This can put the hamstrings under constant tension meaning they are less compliant when needed to lengthen further, especially under load. This makes them more susceptible to strain.
The other problem with this anterior tilt posture is that it can compress and degenerate your L5/S1 vertebrae- an area already vulnerable to athletes. The nerve root which exits your spine at this facet joint supplies the hamstring muscle group. There can be inhibited activation signals to the hamstrings if the origin of this nerve is altered, as when L5/S1 is compressed.
Furthermore, a stiff lower spine/pelvis can restrict entire posterior chain movement, causing the hamstrings to be overloaded. 2-5

Similarly, any restrictions in movement can cause the neural system to become reciprocally shortened. The pain you get from neural tension can limit your range in static stretching. It may be that you have enough length in your hamstring to get full range, but when you go to stretch them you get neural pain which hinders you stretching them as much as you could. Then, when they are lengthened fully during sport, they are unfamiliar with this range and the fibres may fail.

A tight pirifomis muscle can cause compression on the sciatic nerve as it exits the pelvic bowl. This can cause pain down the back of the leg which can manifest in the hamstring muscle group.

When you have pain in the core stabilising muscles around your lower back and pelvis, they become harder to activate. To compensate- because we need to get stability from somewhere- other muscles become easier to activate. This can happen to your hamstrings to the point of over-activity where they are constantly firing to some extent. This puts them under constant tension, again making them less compliant when required to stretch further. 6-8

Forward-lean gait, which puts the hamstrings under tension, is a common cause of injury. Forward-lean can be caused by weakness of the gluteus maximus and requires increased lumbar erector spinae activity, which can occur in concurrence with low-back pain. The gluteus maximus should provide a powerful hip extension movement when sprinting. The hamstrings should act to transduce power through the kinetic chain, as well as decelerating the tibia in gait. In a similar pathology to low back pain, if gluteus maximus is weak, the hamstrings are the first thing to switch on (too much) to compensate for any lack of stability.9-11

A tight hip flexor on the opposite side and/or stiff SIJ on the same side as your problematic hamstring causes limited range. The problematic leg must reach further via the hamstrings to get that missing range that should be provided at other structures. Similarly, the same issue can occur from tight calf muscles on one or both sides. Again, you are asking too much of your hamstrings which are already working hard to control your gait.
Quick tips for giving your tight hamstrings a helping hand:
1) Ensure the muscle and soft tissue at the front of your hips and in your lower back are released to give a bit more range and less tightness here. This should improve your pelvic position. Use a firm massage ball , foam roller, or deep tissue massage for this.
2) Release the gluteal muscles and work on activating and strengthening these muscles using low-load exercises such as the prone leg-raise or glute bridges. Make sure you contract gluteus maximus first, then perform the movement. This will help to turn down activity of the tight hamstrings and strengthen the gluteal muscles which can ease the work load of the hamstrings.
This is not an exhaustive list of probable hamstring risk factors, for a more comprehensive list visit the Victory Health & Performance website or visit the GLC2000 Knowledge Section [Click Here]
GLC2000 – Buy It Now