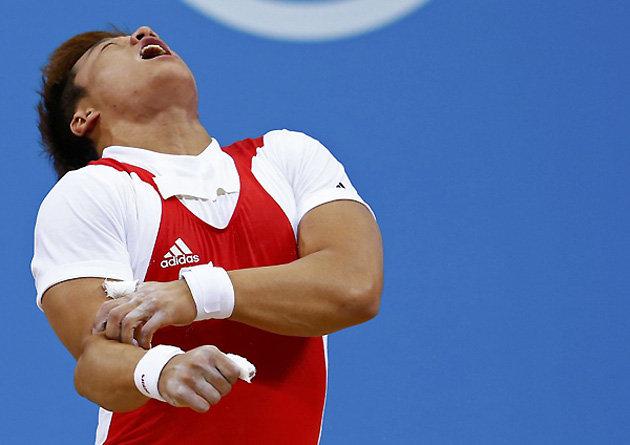 Elbow Dislocation in Weightlifting and CrossFit 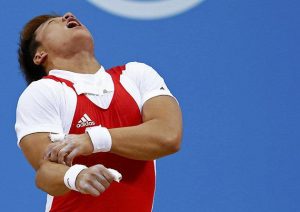 In the 77kg men’s Olympic weightlifting at London 2012 I was in the stands and witnessed Sa Jae Hyouk pop his elbow out (that’s a technical term) during a snatch. At the 2011 Divided We Fall CrossFit competition I saw the same injury during the 3 rep max overhead squat workout. Testosterone was running high and it’s in these competitive settings where we see athletes striving to achieve what has previously been unachievable. Entering into that ‘zone of the unknown’ is where injuries are perhaps more likely to occur, but that’s not to say that there aren’t measures we can take to ensure we’re as bullet-proofed as possible or to put it another way “prehabilitation”.

There are passive and contractile structures that contribute to the stability of the elbow joint. The inert or (as I like to call them) ‘couch potato structures’ that protect your elbow are the joint capsule (a fibrous ball of connective tissue) enforced by a ligament at either side. On the inside you have the ulnar collateral ligament (UCL) and on the outside your radial collateral ligament (RCL). You also have an annular ligament that basically wraps round the head of the radius and prevents it from being pulled out of the socket. Another aspect that contributes to passive intrinsic stability of the elbow is simply the way the joint is formed.
The contractile structures are the muscles that cross the elbow joint so the big players we’re looking at here are biceps brachii, brachioradialis, brachialis, triceps and anconeus.

Who’s more likely to get one and what’s the risk of it happening again?

Elbow dislocations are more commonly seen in males between the ages of 10-20 and just over half occur in the non-dominant arm (Josefsson and Nilsson, 1986). About 50% of elbow dislocations are sport related but have not been linked to one particular sport more than and the good news is that if you ever suffer from an elbow dislocation the risk of recurrence is fairly low (even if you play competitive sport). Kenter et al (2000) conducted a 5 year retrospective study over 5 years looking at NFL players who had sustained elbow dislocations to see how many of them had a repeat episode. Of 91 participants 15% had another dislocation or subluxation (partial dislocation). 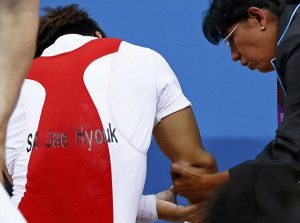 Mechanism of injury (How does it happen?)

As with the shoulder there’s a directional preference to dislocations. Most shoulder dislocations are anterior (pops out the front) and with elbows 90% are posterolateral (back and out the side). Quite often the cause is a fall on an outstretched hand or from trauma during contact sports. In CrossFit the mechanism I’ve seen is a hyperextension of the elbow.

What to do if you find yourself with a dislocated elbow

1) Get to A&E: The joint needs to be reduced or relocated (whatever term you want to use) and the sooner the better. Success rates for relocating a joint drop dramatically after 7 days (DeLee et al, 2009) This needs to be done by a qualified medial professional who will assess what type of dislocation it is and the provide the appropriate relocation. DO NOT TRY AND D.I.Y IT! This isn’t B&Q job.
2) Immobilisation: For a certain amount of time you’ll be put in a sling (or in extreme cases a cast if there’s been a fracture as well as a dislocation) to unload and rest the elbow to give it time to recover. The duration will depend on how severe the dislocation.
3) Road to recovery: Rehab starts with gentle pain-free range of motion exercises progressing to single plane, isolated joint open chain strengthening exercises progresses to functional compound movements depending on the demands of your sport. Early range of motion exercises are improved as in some cases people lose end range extension of the elbow.

What can I do to prevent it?

1) Hypermobile? Strap it up or wrap it up
Most people will know if they’re hypermobile or not and joint laxity doesn’t necessarily mean you have instability, but I would say as a preventative measure that if you do have an elbow that hyperextends under load and you know you’re going to be doing 1rm snatch, having an extra bit of support from a strap is going to make you less likely to go beyond your normal physiological range of motion.
QUICK TEST: Standing up relax your arms by your side with your palms facing forward. The angle formed between your upper arm and forearm is known as ‘the carrying angle’. For guys a normal carrying angle is between 5-10 degrees and for girls about 10-15. This angle exists so that when your swing your arms during walking you don’t smack your hips. Women have wider hips than guys thus necessitating a larger carrying angle. If you have more than your normal range, you may be hypermobile.
2) Strengthen for your sport
When you’re injury free and strengthening for the purpose of creating better joint stability and preventing injury functional/sport specific exercises are key. Unfortunately in CrossFit you don’t always know what’s going to come out of the bag but here are a few exercises you can do to help improve the overall stability or your upper extremity.
A) Ring isometric shoulder stability (clean grip width)

– Same as per above
– As you descend forward allow the arms to come outwards to snatch grip width
– Work within the range you are able to maintain a stable midline and shoulder position and progress by gradually increasing the hold time in the finish position e.g. 3 sec holds to 5 sec holds

– Begin by setting up a kettlebell or object of your choice in front of a wall
– The distance you set the object from the wall will dictate the difficulty (further away = easier, closer = harder)
– Walk your hands in small steps clockwise then anticlockwise around the object


3) Know your limits
Of course CrossFit is all about pushing your limits but having an awareness of where those limits are at any given time is crucial in avoiding injury. There is difference I feel between going for something you haven’t done before and having confidence you are capable of achieving it and foolishly giving in to peer pressure, attempting to deadlift a weight that you know is way beyond you. There are times to push and there are times to hold back and knowing which is which is key. Don’t be afraid to scale a workout if performing it Rx’d is going to put you at risk of getting injured and not being able to train for a week. Only you truly know your limits so be honest with yourself and stick by them. I’m not condoning doing a 40kg Grace if you’re perfectly capable of doing 62.5kg and are just being a wimp.
NB: The exercises are intended for those that are injury free. DO NOT attempt to perform these if you have an outstanding injury without advice from a qualified trainer or physiotherapist.

J.Glover BSc (Hons) Physiotherapist MCSP
Jay is an avid Crossfitter, and runs his Physiotherapy practice out of TRAIN Manchester, UK.

Read Jay’s article about dealing with lower back pain here

One response to “Elbow Dislocation in Weightlifting and CrossFit”